“Asantehemaa Has Become The Salt Of Asanteman”- Rev. Ofori- Boateng.

Asantehemaa, Nana Ama Konadu Yiadom III has been described as the “salt of Asanteman” as well as the “Mary and Priscilla” of the kingdom.

Her Royal Highness (HRH) is said to have shown exemplary lifestyle over the past five years after taking up the role as the Asantehemaa.

In a sermon during the Thanksgiving Service on the Occasion of the Fifth Anniversary of her enstoolment at Manhyia, the Director of Programmes for the Anglican Diocese of Accra, Reverend Akua Buabema Ofori-Boateng said the life of Asantehemaa is a true manifestation of a good Christian.

She added that God requires Christians to be the salt of the earth through kindness, love etc.

“as Christians, our presence in the land should bring out the flavours of our Lord Jesus Christ, kindness, goodness, faithfulness, peace, love, that is what we must see manifest if we say we’re the salt of the earth, and this is exactly what Nanahemaa does.”

She referred to Asantehemaa’s donation to some patients at the Komfo Anokye Teaching Hospital (KATH) and Manhyia Government Hospital as a perfect example of kindness and goodness.

“Nanahemaa visited some hospitals and settled the bills of some patients who were incapable of paying.

“These patients became more like prisoners but were released by Nanahemaa and that is what the Lord Jesus Christ said, he said I have been anointed to come and deliver the prisoners,” Reverend Akua Ofori-Boateng.

The Thanksgiving Ceremony which was highlighted with some ministration by gospel artistes, Diana Antwi Hamilton, Obaapa Christy and Daughters of Glorious Jesus also saw some state officials such as, Minister of Trade and Industry, Alan Kyerematen, the Former Mayor of Kumasi, Kojo Bonsu. 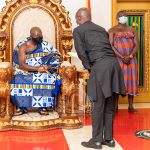 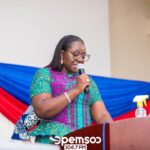